I think any flight attendant can attest that we get asked A LOT of questions about our jobs and the lifestyle that comes with it! Sometimes it feels like the deeper I dive into our world the more follow up questions and the more utterly confused people are. My roommate thinks I’m insane when I start talking in FA speak and my dad while he enjoys the benefits of my free flights, has NO idea what my life is like on a normal basis. Hell, neither do I sometimes. While I won’t say this is every flight attendant’s experience as all airlines are slightly different I can say this is mine and I’m happy to answer the top questions that I get asked most often. Well, besides how to open the lavatory door because let me tell you, NOBODY KNOWS HOW TO OPEN THE DOOR OF THE BATHROOM DOOR.

What is your “route”?

Short answer, I don’t have one. Long answer: There are two types of flight attendants, those who hold lines and those who don’t or “reserves”. As a line-holder you “bid” for your schedule for each month which is entirely based on seniority. These schedules are every trip you’ll work that month, where you’ll layover and how many hours you’ll fly total. The more desirable the trips (aka international, Hawaii, etc) the more senior the line goes to. So for that month that is their “route” but more often than not unless you speak a specific language OR are so senior you can hold the same route- your routes change month to month. Being a line-holder is the goal and the more seniority you have under your belt, the more desirable trips you can fly regularly.

I am on reserve which means in a very basic explanation I go where I’m told, when I’m told- domestically and internationally. My days off are my days off but when I am “on” the earliest I know what I’m doing is about 24 hours ahead of the trip, the latest is 3 hours before the check-in time. There are 3 things that can happen to you when you’re on call… 1) You get assigned a trip. It can be anywhere from 1-4 days long but the moment I get assigned it, I do know what I’m doing each day/where I’ll be laying over for that length of the trip. 2) You get assigned Standby. Standby is when I get sent to the airport to sit for 4 hours to potentially fill in on a trip that falls apart- because we typically have 3 hours to get to the airport it’s important to have some reserves already sitting at the airport in case a crew goes illegal (delays, last-minute sick calls, etc) so that we can run right to the gate and cover that trip. Standby is F&*%($* impossible to pack for but that’s a subject for another time! If nothing goes awry by the time your 4 hours are up, you go home. And finally, 3) you sit on call but do not get used. This happens occasionally, where we are on call the whole day but the operations have gone well enough that you do not get sent anywhere. It’s nice when it happens which is far more frequently in the slow season- my record is 10 days of on call straight that I didn’t get used which was at the end of January aka the slowest month ever. The amount of Great British Baking Show I watched would make your head spin.

So what is your schedule like/how do you get paid?

I get 12 days off a month as a reserve flight attendant and a base rate for flying a certain number of flight hours. The 12 days off can for the most part be put anywhere I’d like them (with the exception of holidays which LOL you’re never getting off). I do not have a 9-5 kind of personality so I’d much rather work longer days (our duty days are usually more like 10-13 hours instead of the standard 8) to get more days off that I can put where I’d like them.

If you fly over your base rate you get more money, if you fly below it- you still get paid for the full amount you were guaranteed. Our pay structure is freaking bonkers so I probably won’t ever get further into that because I can assure you- it makes no sense. Fun fact if you don’t already know it: Flight Attendants are not getting paid our hourly rate until the brakes of the plane release at the gate and we stop getting paid when the brakes are set at the next gate.

Where is your favorite layover?

IMPOSSIBLE to pick one. While it’s been amazing to get to explore big cities that I had never been to I am far more happy when I get to adventure around the small towns. My favorite big cities are probably Pittsburgh (pierogies til I die), San Diego (holy prettiest people ever) and Portland, OR. My favorite small cities are anywhere other than Portland in Oregon, Madison, WI and obviously Burlington, VT… does it count if I’m from there? I think it does.

How long are your layovers/do they put you up?

Our layovers range from 10 hours (the shortest) to some international destinations of 48+ hours long. It honestly just depends on the trip. I prefer the longer layovers on my trips obviously because I love exploring new cities, especially if I know someone there that I can visit. They do put us up and actually in most places really nice hotels; like some of our international layover hotels are DOPE. Basically if our layover is over a certain number of hours they are required to put us up “downtown” in that city but if it is shorter we are put up by the airport.

What is the longest flight you’ve ever worked?

When I was based in San Francisco I got called in for Standby one morning. Moments after checking in scheduling called to tell me I was working to Incheon. I told the lady I didn’t know where Incheon was and she was clearly in a hurry so she just told me what gate to go to. Off I went to the gate and boom 11 hours later I landed in Incheon or better known as Seoul, South Korea where I would spend the next 24 hours eating as much Bibimbap as I could get my little hands on.

Where are you based/where is home?

Out of training my entire class was sent to San Francisco to be based. Being from Vermont I knew I would not commute back and forth so I actually moved to the Bay Area and signed a lease for a year (biggest check I’ve ever written was singing that lease). When I requested a transfer to Denver I did not renew my lease and instead moved into what a large population of junior flight attendants live in because #costofliving called a “crash pad.” Crash pads are not sponsored in any way by any airlines specifically but they are SUPER common in the industry because a large number of flight attendants and pilots alike are “based” somewhere but they actually live in a different city and commute in for their trips. A crash pad is usually an apartment close to the airport where you rent a bunk on the nights you have to be in that base (say you have an early check in one morning but you can’t physically get to the airport that same morning, you come in the night before and sleep in your bunk). My crash pad was considered a luxury find as it was a 3-bedroom house that I shared with “only” 16 other flight attendants. My room “only” had 4 people in it and I was even allowed 20 hangers in the closet (the fact that we even had a closet in our room was a big deal!) We each paid $500 a month for a single bunk… let that sink in people! Most crash pads in the Bay are more like 2-bedroom apartments with 16 people- 8 to a room and sometimes ONLY ONE BATHROOM! It is easily the most absurd part of the industry.

My old crash pad bunk decorated oh so sweetly by one of my roommates. 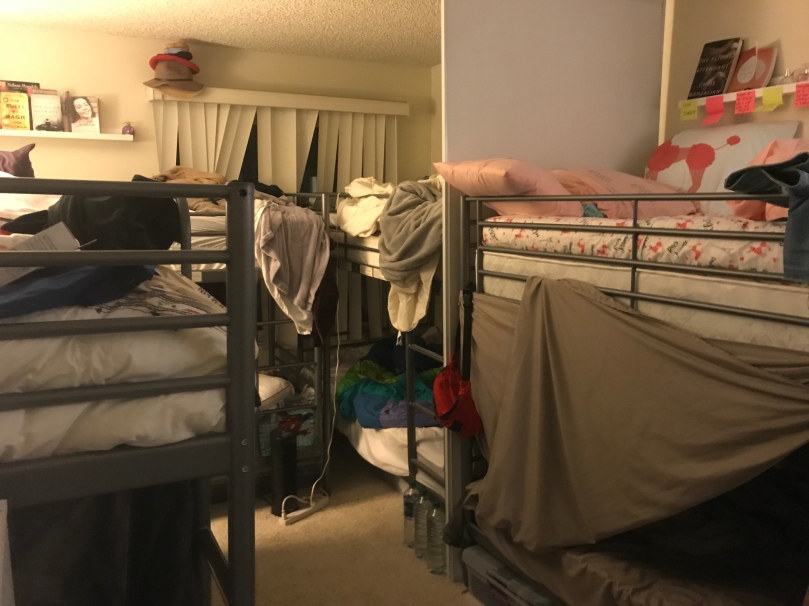 I am now based in Denver where I have always wanted to live and as of a few months ago, I officially call home! I live downtown with 2 “normal people” roommates who sleep in their own rooms and I am happy to report that I have a whole closet full of hangers all to myself 😉

Have a happy week friends!

Disclaimer: All views are my own and do not reflect any official policy or position of the company I work for.

I’m Kari, and I am so happy you stopped by my little corner of the world.

I stood up on the ole paddle board today 💪
Besides budgeting, working with what you have is the hardest part of rental apartments (I would rip this countertop and towel bar out in a heartbeat) but I’m happy with where this guest bath is going so far!
It felt irrationally good to spend the night “away” this weekend even if it was less than an hour away from home 😉
First l project in the new apartment: create the coziest bed (on a budget) ever!
When I was based in San Francisco and living on an incredibly tight budget Trader Joe’s made me feel like I could momentarily live like a King on a ramen budget!
Name a more perfect spot to start a new book. I’ll wait 😉